With a prestigious genetic lineage and a standout flavor, Sour Headband is a sativa-dominant strain with something for everyone. This bud is a cross between perennial favorite Sour Diesel and classic hybrid Headband. It offers long-lasting, mentally acute effects. It also has a remarkably strong, mouth-puckering smoke that may be an acquired taste for some. Sour Headband’s THC content has been estimated at between 17% and 25%.

Trimmed flowers of Sour Headband are marked by their small to medium size and their chunky, roughly spherical shape. Despite their mostly sativa lineage and effects, they have an indica-typical structure, with leaves that curl tightly inward toward their stems. The actual leaves are a mossy green and are wound through with dark brown pistils. Finally, they’re finished off by a spotting of glassy white trichomes that make the flowers very hand to break up without a grinder.

When properly cured, Sour Headband’s impressive flowers carry a strong, gasoline-tinged flavor. Another inspection picks up on the bud’s tangy citrus notes as well. Grinding these flowers up, meanwhile, gives off a skunky pungency. When Sour Headband is burnt, it typically gives off a strong and acrid smoke that can tickle the sinuses and palate. On the exhale, this smoke has a flavor that blends lemon and diesel.

Sour Headband tends to assert itself not long after users have taken a hit. Within a couple of minutes, it begins to work on the head, creating a feeling of pressure around the temples and lower forehead, a sensation for which it (and its parent strain Headband) is named. This sensations of constriction can come alongside some flushing in the cheeks or a stimulation of the salivary glands. Once Sour Headband’s strange physical tics become more familiar, they are followed up with an uptick in the consumer’s cerebral patterns of thinking. Ideas may flow more frequently and may jump from one to another in free association. Some smokers may also become fascinated by concepts or even objects that would otherwise be unfamiliar. This kind of focused, tuned-in thinking can facilitate work on complicated, detail-oriented tasks as well as on freewheeling creative pursuits. Thanks to its sense of mindrace, the strain may also inspire conversation and good vibes in social situations, even when shared with new acquaintances.

Sour Headband also provides a discernible jolt of energy and those who are athletically inclined can burn it off with some light to moderate exercise. In the right set and setting (and with the right company, of course), this bud may also be a potent aphrodisiac. As time passes, Sour Headband’s sense of mental acuity persists; although smokers may experience mild physical relaxation, they aren’t often weighed down by any heavy body stone. Because of its mostly buzzy properties, Sour Headband is best enjoyed during the daytime; if consumed before bed, it’s liable to keep smokers awake and wired.

Sour Headband’s versatile effects can also have some uses for medical cannabis patients. It may provide some lasting concentration for those with attention deficit disorders. It can also temporarily take the sting out of mild to moderate cases of stress and depression. Physically speaking, the strain may soothe aches and pains, whether they’re temporary, as due to injury, or chronic, as due to conditions like lupus or arthritis. Finally, the strain’s trademark tingle around the eyes and forehead can help to relieve the intraocular pressure associated with eye conditions like cataracts and glaucoma. Because it can bring about obsessive, recursive patterns of thinking, Sour Headband is not recommended for patients who are prone to panic or who have a low THC tolerance.

Seeds of Sour Headband are not available for sale from digital retailers. Instead, those looking to grow it at home should seek out clippings of the strain that can be propagated as “clones.” Once obtained, Sour Headband can be grown indoors or out, although successful outdoor cultivation requires a semi-humid, Mediterranean-like climate with daytime temperatures between 70 and 80 degrees Fahrenheit. The strain flowers within 7 to 8 weeks when grown indoors. At maturity, it offers up a yield of between 44 to 49 grams (or 1.5 to 1.7 ounces) of flowers per square foot of plant.

Sour Headband’s vibrant, focused properties make it a great way to enhance a nature hike or a day at the beach. This can be a very pungent smoke, though, and those looking to maintain discretion should take any necessary precautions.

Be the first to review “Sour Headband” Cancel reply 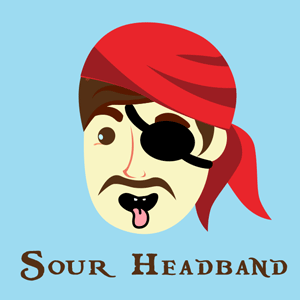