The man behind Cultivator’s Choice and Sacred Seeds – Sam the Skunkman – created a strain by the name of Wonder Woman.

A potent blend of mostly Sativa genetics, this strain began with the often picked White Widow chosen as the mother. The father is the product of crossing a landrace Thai, Haze and Skunk #1 hybrid mother with one of his own pure Skunk #1 males. From this conglomeration comes a strain that produces a strong cerebral high that elevates moods. Wonder Woman is a strain often recommended for anxiety, depression and stress relief.

Wonder Woman can be grown inside or in a greenhouse but it has trouble with the great outdoors. This strain is not the easiest to grow and ends up typically being on the taller side, requiring a decent amount of space. Producing a larger than average yield, Wonder Woman needs about 10 weeks of flowering before she is ready for harvest. When grown in a greenhouse plants will be ready in late October or early November.

There is also another strain, released by Nirvana Seeds, that claims the name Wonder Woman. However, Nirvana has not released the genetics behind their Wonder Woman but some believe it to be descended from Ice.  Nirvana’s Wonder Woman is an Indica dominant strain that produces a wide range of effects. These seeds are good for indoor or outdoor use and require nine to 11 weeks to flower. Capable of yielding up to 600 grams per square meter, Nirvana’s Wonder Woman does well in a Sea of Green.

Be the first to review “Wonder Woman” Cancel reply 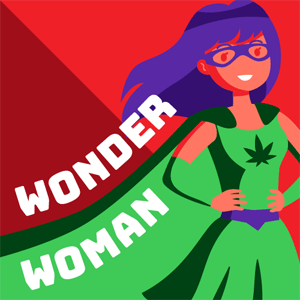