Hades OG, also known as Hades OG #25, is an interesting evenly-balanced hybrid strain of cannabis first grown in the United States of America. It is important to know that Hades OG is the result of both extreme testing and sheer luck. Humboldt Seed Company, a popular California cannabis grower conducted a phenotype hunt in 2016 which involved growing thousands of OG plants looking for any interesting phenotypes. They collaborated with Dark Heart Nursery, who picked this particular plant out of the narrowed-down field of one-hundred plants in front of them. This particular OG plant, number 25, was the result of Dark Heart Nursery’s Fire OG being crossed with Humboldt Seed Company’s Humboldt OG. As the name Hades OG suggests, this phenotype was chosen for its “mean” looking appearance, including serrated leaves and dark hue in addition to its strong production capabilities. This evening strain provides a balance of both heady and body effects much to the delight of almost everyone who consumes it.

Hades OG nugs are typical of OG flowers, meaning they’re medium sized and rounded off during the flowering period. They often present themselves as a hue somewhere between forest green and violet purple. They are covered in white trichomes and a few burnt orange hairs. The bud smells quite similar to lemon-scented Pine-sol mixed with the classic diesel and kush scents of the OG family. The plants themselves are coveted because they grow quite large, and are known to double in size during the flowering period. Experienced growers who trim the excess leaves on their plants can see incredibly large yields, which is one of the reasons the original Hades OG plant was chosen for cultivation. This doesn’t mean it’s hard to grow, in fact, Dark Heart Nursery suggests this plant for beginners to intermediates looking for a heavy yielding plant.

The high from Hades OG is not only powerful, but enjoyable enough that it has garnered a little fandom that routinely purchases it on days when their dispensaries get more in stock. It is reported to give not only pain relief, but also mood elevation which can help those suffering from depression. Hades OG is the pick-me-up that most people need after a long day of work, as its effects only grow in intensity as more and more is consumed. The high eventually progresses to a sedative state in which even the most experienced of stoner will feel a bit drowsy. Hades OG should be consumed during the evening hours, as it might be a bit dangerous to go out and about when you’re this high. Hades OG is a surefire pickup for anyone looking to alleviate symptoms of chronic pain, stress, insomnia, and headaches.

Be the first to review “Hades OG” Cancel reply 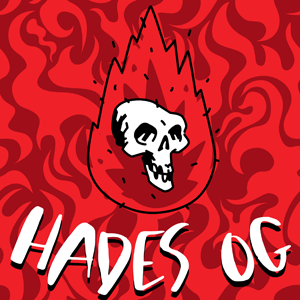