Gorilla Grips is an Indica-dominant hybrid strain of cannabis first grown by SinCity Seeds. This small seed collective originally began when a group of underground growers in Los Vegas collectivised and began preserving the genetics of their personal plants. After the legalization of cannabis in Las Vegas, these growers went legit and began selling their product legally. Gorilla Grips is the product of crossing Gorilla Glue #4 with SinCity’s own Blue Power. This cross resulted in a strain with hard-hitting and long-lasting effects which often tests between 23-25% THC. This daytime strain is often labeled as “Gorilla Grip” or just “Grip” in some markets, but all three names refer to the same strain.

The buds produced by a Gorilla Grips plant are often oversized golf-ball sized nugs that range from olive green all the way to deep purple depending on the grow and harvest. They are often covered in bright orange hairs and a dusting of off-white and amber trichomes. This bud is a stinker, and is absolutely going to offend your upstairs neighbors if you smoke indoors. Even busting open the packaging of this bud is enough to fill the room with a pungent aroma of skunky earth mixed with sour grapes and spicy herbs that feels heavy in your lungs. The flavor is a lot lighter, with a bit of a blueberry-grape flavor accented by pungent skunk on the exhale.

The high from this strain is nothing short of excellent, and has made it quite popular in the markets where it is sold. Like most Indica-dominant hybrids, the high is a creeper, slowly building behind the eyes until explodes like an overflowing dam, sending waves of relaxation throughout the rest of your body. Your mind will feel hazy and unfocused, as you struggle to focus on anything but the rerun of The Office you turned on before sparking up. Gorilla Grips is a strain that consistently gives individuals the feeling of couch lock, which is a sensation of complete and utter relaxation and sedation that leaves you, as you guessed, locked on the couch. As the high resolves, you feel a bit lighter and a bit more social, which makes this strain great to use on a day off of work or at a kickback with some buddies. Gorilla Grips is consistently purchased by medical cannabis patients who are searching for relief from ailments and symptoms such as depression, chronic pain, stress, anxiety, migraines, cramps, and ADHD.

Be the first to review “Gorilla Grips” Cancel reply 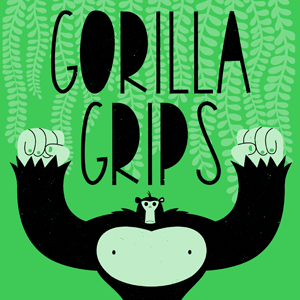