3x Crazy (or 3x Times Crazy, and sometimes known as Optimus Prime) is an indica-dominant hybrid that packs a serious punch. Its name is reference to its genetics, a three-way cross between OG Kush, Bubba Kush, and Granddaddy Purple. These powerhouse strains combine to create a balanced strain that offers cerebral effects upfront and a heavy physical relaxation on the backend. Aside from a colorful and fragrant bag appeal, 3x Crazy has potency to boot: its THC content has been measured at between 15% and 23%.

If the name of this indica doesn’t catch your attention, its large, colorful flowers will. The buds are solid and nearly spherical in shape. They hold the dense bud structure usually associated with indicas. The coiled leaves are a mossy shade of green and are threaded through with vibrant orange pistils. More often than not, phenotypes of 3x Crazy also exhibit patches of muted purple and blue in equal proportion to green. These surprising colors are the result of pigments called anthocyanins — passed on from parent strain Granddaddy Purple —  that bring out different hues when agitated by colder than average weather during the growing process. Finally, the mottled flowers are covered in unusually large, translucent white trichomes that give the buds a sticky texture and an icy gloss.

When properly cured, 3x Crazy smells fruity and sweet, with a mixed grape and berry character. On closer inspection, there is also a smoky, earthy scent, with notes of sap and pine lurking underneath this fruity bouquet. Breaking open the buds yields some spice and incense, a testament to the OG Kush in this variety’s background. When combusted, 3x Crazy burns with a smooth and easily ingested smoke that tastes clean and fruity on the exhale. Notably, any discernible grape flavors are coincidental to this strain’s purple leaves; while its color is determined by pigmentation, its aroma is dictated by separate botanical compounds called terpenes. 3x Crazy can be a particularly pungent smoke, so tokers who are preoccupied with discretion should take the needed precautions.

3x Crazy is known to offer a creeper of a high, and may require several minutes before beginning to reveal its effects. Smokers will eventually detect a bracing pressure at the front of the head and around the temples. Around the same time, thoughts may begin to flow more freely and easily. The ensuing mental lucidity is a good primer for work that requires analysis, creativity, and concentration. Within an hour or so, this head high settles into a more sedate feeling of physical relaxation. Waves of soothing contentment spread down from the neck through the spine and extremities. Many users report feeling grounded (rather than disoriented) by these relaxing effects. The body may tip over into an intractable sense of couch-lock for the duration of the high. Despite this sedation, though, 3x Crazy can be a remarkably social high, inspiring conversation and provoking fits of giggles. This strain is best enjoyed during the late afternoon or early evening, when its backslide into sleepy meditation can be fully appreciated.

3x Crazy may have several applications for medical cannabis patients as well. Although short-lived, its cerebral effects can help those with attention deficit disorders to sustain some concentration. Meanwhile, its numbing indica effects can relieve aches and pains, whether they’re temporary or chronic and nerve-related. The bud’s mood-elevating properties can also take the edge off of mild to moderate cases of stress and depression. Finally, in large enough doses, 3x Crazy can lull insomniacs into a deep, fulfilling sleep. Because this strain’s mental effects do not commonly lead to recursive, paranoid thinking, it can be a good option for patients who are prone to panic.

Unfortunately, no commercial breeders have made seeds of 3x Crazy for sale online; prospective growers must obtain clippings from mature plants in order to cultivate genetically identical “clones.” Plants can be grown indoors or out, although outdoor growing calls for a semi-humid, almost Mediterranean climate. The plants grow short and bushy, with strong lateral branches, and are easily accommodated indoors. Those looking to bring out the bud’s signature blue and purple hues should also briefly expose their crops to nighttime temperatures between 10 and 15 degrees below average. 3x Crazy flowers within 7 to 9 weeks when grown indoors.

3x Crazy is an ideal hybrid for sativa fans who’d like a dash of cerebral thinking along with their body melt. You don’t have to be crazy yourself to enjoy this strain — but it certainly won’t hurt.

Be the first to review “3x Crazy” Cancel reply 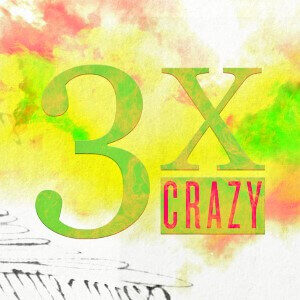